Sebastian Anton Scherer: (b Ulm, 3 Oct 1631; d Ulm, 26 Aug 1712). German composer and organist. He spent almost the whole of his life in his native town. He probably studied with Tobias Eberlin, organist of Ulm Cathedral, whom he succeeded on 22 December 1671 and whose daughter he married. He had been elected a town musician at Ulm on 17 June 1653, and it was probably about this time or shortly afterwards that he became assistant to Eberlin. In 1668 he became director of music at the college in Ulm and taught the cathedral choristers. According to Eitner he was appointed organist of St Thomas’s Church, Strasbourg, on 4 November 1684, but, as André Pirro suggested, he only acted as consultant in connection with the organ there: he was in fact organist of Ulm Cathedral for over 40 years up to his death. Several pieces in Scherer’s op.1 reveal a sensitive and imaginative approach to word-setting. He dedicated his op.2 to the collegium musicum at nearby Memmingen, where he may have had family connections and musical associates. The plan of the publication, half of which is in tablature and half in score, owes much to Frescobaldi’s Fiori musicali (1635), and the last intonation uses the bergamasca theme that Merulo and Frescobaldi had popularized. The volume is not, then, a livre d’orgue in the French manner but a fine collection of sturdy organ music in the Italian manner, full of ingenuity and invention. Some of the trio sonatas of 1680 are of fine quality, and the slow movements anticipate the restrained beauty of Corelli’s sonatas. 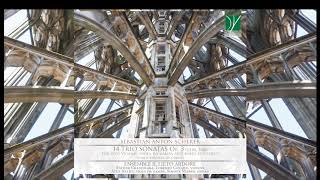 Best Of Our First 25 Years!